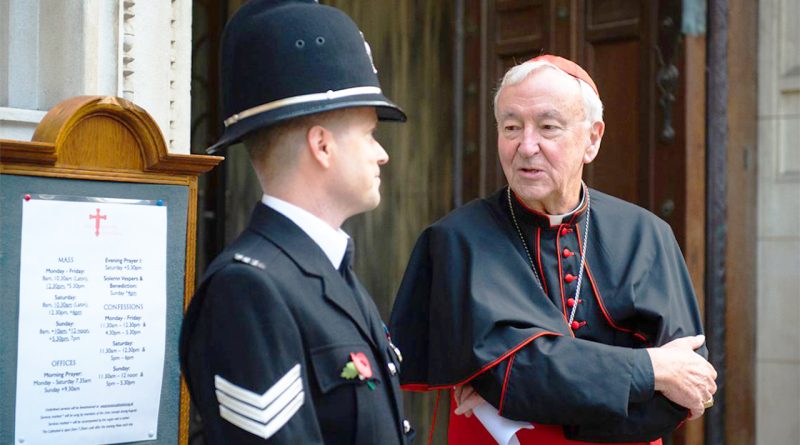 The Archbishop of Westminster has spoken of the “many gifts” that make up the Metropolitan Police Service during a homily in Westminster Abbey.

HE Cardinal Vincent Nichols Cardinal Nichols thanked police officers for their dedication in serving the public at a Service of remembrance and recognition for the Metropolitan Police at which took place at the abbey on Tuesday.

He said that the particular gifts officers displayed were: “a desire to help our society live ordered lives; to combat the havoc caused by criminals; to know, appreciate and uphold the law; to be attentive to detail and use the best of science to further the service you give; to strive to work with integrity; to know how to offer compassion to victims and help them survive their trauma.

The Cardinal also remembered those officers who have died in recent years when the Covid pandemic prevented corporate acts of remembrance and recognition.

“I ask each one of you now to recall a face, a friend, a shared endeavour with one who has now left this world and your Service,” said the Cardinal.

“Cherish again the things you shared, both happy and difficult and dwell on them for a moment.”

Full text of the Cardinal’s Homily

Today is a day of memories, a Memorial Day.

In our crowded lives, such days are important. They give us the opportunity to recall earlier inspiration, to refresh a sense of purpose, to remember lost friends and colleagues, to feel again both deep sadness and real satisfaction. Without moments such as these, our lives can become both hectic and shallow, lived on the busy, demanding surface of daily activity, which can slowly erode our first foundations and leave us on the road to cynicism and world-weariness.

It is important to remember.

Today you are together to remember so many of your colleagues, especially those who have died in these last years when the pandemic prevented this corporate act of remembrance and recognition. So I ask each one of you now to recall a face, a friend, a shared endeavor with one who has now left this world and your Service. Cherish again the things you shared, both happy and difficult and dwell on them for a moment.

A few moments ago we heard some words written by St Paul. He was reflecting on the life of the service to which he was so totally committed: the service of Jesus Christ. He looked around his colleagues in Corinth and saw not only some conflict and strife but also great gifts. He was concerned to bring those gifts together and keep them together. So he began to list some of those gifts, pointing out that there was a unifying force behind them: they were all gifts given by God and, when properly used in a concerted effort, served the greater good of all.

You know better than I the range of gifts that make up the Metropolitan Police Service. Among them must be a desire to help our society live ordered lives; to combat the havoc caused by criminals; to know, appreciate and uphold the law; to be attentive to detail and use the best of science to further the service you give; to strive to work with integrity; to know how to offer compassion to victims and help them survive their trauma. There are many gifts among you, here today and among those who have gone before you. Today is a day for thanking the giver of those gifts, remembering the words of St Paul: ‘it is the same God who activates all of them… for the common good.’ Consistency in these gifts wins public confidence.

If today is a day for memories which can help us to stay focused, then this Abbey is a place of memory which can serve in the same way. Here we find not only a powerful context in which to hold this Service, but also a rich store of inspiring memories.

Allow me to highlight just one.

Behind the high altar here, lie the mortal remains of the only English King ever formally declared to be a saint: St Edward the Confessor. He died in January 1066 and was responsible for building the first Westminster Abbey, of which this Abbey is the replacement. He was king for 26 years and, inevitably, there is much ambiguity and complexity about his life, his achievements and his virtues. Yet one quality is clear: the unaffected generosity of his nature. He set himself to serve those about him by easing their burdens, by relieving their needs, by confirming them in their allegiance to the faith which gave meaning to their lives.

Many are remembered in this great Abbey. And what they have in common is that their lasting memorial is founded upon the good they did in the service of others. As one great preacher put it, remembering the conquest of 1066 which brought an end to the kingship of the family of King Edward:

“William the Conqueror, who diverted the stream of history, went to his grave disappointed and lies there a historical memory. The Confessor, whose ambitions could be satisfied by finding a poor man his dinner, saw no corruption in death, and lives the patron of his fellow countrymen.” (Mgr Ronald Knox, 13 October 1922).

Today as you remember those who have gone before you, see in them something of this same desire to serve and give thanks for their lives and achievements, be they great or small.

Yet this great Abbey stands for a still more important memory.

Faced with the reality, the inevitability of death, the human spirit is perturbed and questioning. Almost every culture and civilization has grappled with this existential dilemma: what is the meaning of death? In what does it consist: the snuffing out of a candle or the doorway into a different future?

This Abbey stands, and has stood for nearly a thousand years, as an eloquent reply: the reply of Jesus Christ, the Word of God in our midst. His reply is our saving grace for it casts our everyday efforts into a totally new context: that of an eternal fulfilment of who we are, and of the gifts we have received. Jesus speaks of that future as a homecoming, as a standing before the Creator, the Father, and being received in mercy and love into an everlasting life.

But there are many ways of speaking this same word. The first reading we heard is one of them. What lies before us beyond death, the reality to which those who have died are called, is cast as a splendid banquet, satisfying every taste and consisting of only the very best.

Remember the words: ‘a feast of rich food, a feast of well-aged wines, strained clear.’ But what is more, it is a feast of joy and gladness:

‘The Lord God will destroy on this mountain the shroud that is cast over the people…. He will wipe away the tears from all faces and the disgrace of his people he will take away…’

These are the promises we hear today: a promise of life after death, indeed the promise of life in its fullness. This is the belief of which we sing. This is the hope that can sustain us through life with all its hardships and dismay. This is the vision which we can hold in our hearts for those who are, today, the focus of our remembrance and recognition. May they rest in God’s peace, through Christ our Lord.