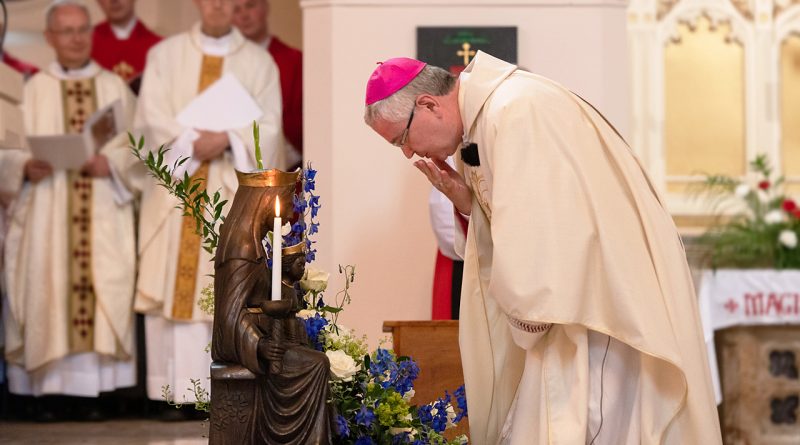 Appointed by Pope Francis, Archbishop Mark O’Toole had been Bishop of Plymouth since 2013. Succeeding Archbishop George Stack, who has been in post in Cardiff since 2011, today’s installation coincides with the feast day of the Welsh martyrs Saints Julius and Aaron.

As well as assuming oversight of the Catholic communities in the Archdiocese of Cardiff, Archbishop O’Toole also becomes the new Bishop of Menevia, a diocese which includes Swansea and its surrounding areas.  A second ceremony takes place on Thursday (June 23) at Swansea’s Cathedral Church of St Joseph to celebrate this. The two dioceses combined incorporate much of South and Mid Wales, alongside Herefordshire.

Having spent the last eight years as Bishop in the Diocese of Plymouth, ministering in the counties of Cornwall, Devon and Dorset, Archbishop O’Toole looks forward to immersing himself within the communities of both dioceses.

In his homily during today’s service, Archbishop O’Toole said he ‘needs to listen and learn to begin with’.

The Archbishop went on: “I have been delighted to hear that since I came to Wales, Wales aspires to be the first Nation of Sanctuary.  This is an expression of the love of God, too, manifested in the love that the people of Wales have for men, women and children from all over the world who have been forced to flee their homes.

“I am so grateful for the presence of some of our ecumenical and civic leaders here today.  With our inter-faith partners, and with all people of goodwill, we want to work together, even in little or small ways, to build up places of sanctuary in our churches and in our communities.

Fifty-nine-year-old Archbishop O’Toole was born in London and has spent much of his ministry there. He said: “I am grateful and humbled by the trust that the Holy Father has placed in me.  I face the task ahead both with excitement and a certain trepidation, conscious of my own weaknesses…it is with [a] deep sense that the Lord goes before all of us in this new mission, that I fully embrace this new calling in my life.”

He gained a M.Phil in Theology at the University of Oxford from 1990-1992, where his thesis supervisor was the Lady Margaret Professor of Divinity and Swansea-born former Archbishop of Canterbury, Dr Rowan Williams.

Bishop O’Toole’s predecessor, Archbishop George Stack said: “I warmly welcome the appointment of Archbishop Mark O’Toole as Archbishop of Cardiff and the Bishop of Menevia ‘in persona Episcopi’. This provision has been made by the Holy See maintaining the identity, juridical reality, history and pastoral life of each diocese.

“Archbishop Mark will bring great gifts to this new ministry. The people of each diocese will be blessed by his experience as Bishop of Plymouth. His pastoral, theological and administrative skills will be of enormous benefit to us all.  His national responsibilities as Chair of the Department of Evangelisation and Discipleship in the Bishops’ Conference of England and Wales have been recognised by the Holy See in his membership of the International Council for Catechesis. His Celtic heritage will resonate with the Catholic faithful in Wales and in the wider community of his new home.”

Cardinal Vincent Nichols, President of the Catholic Bishops’ Conference of England and Wales said: “I offer Archbishop Mark my fullest support and fervent prayers as he prepares to take on his new role.  I am sure that the Catholic community throughout Wales will welcome him warmly, as will leaders of other churches there and those of civic society. St David and All Saints of Wales, pray for him.”