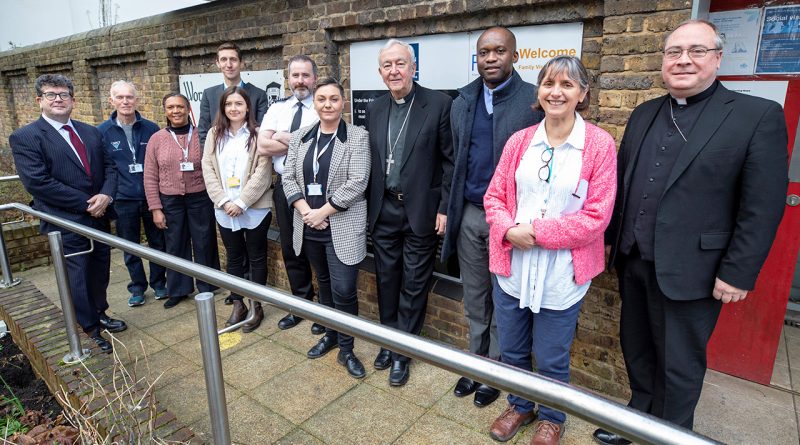 Cardinal Vincent Nichols met with prisoners at HMP Wormwood Scrubs yesterday (weds 19th Jan) in response to Pope Francis’s call ‘to engage in the exercise of deep and respectful listening to one another’. The Cardinal told the prisoners that he particularly wanted ‘to listen to those who can often be forgotten’.

The visit was facilitated by the Prison Advice & Care Trust (Pact), of which Cardinal Nichols is President, and supported by Acting Governor Dom Ceglowski and Fr Chima Ibekwe, Catholic Chaplain at HMP Wormwood Scrubs. While it remains a difficult time for prisons as they work hard to mitigate the risks of COVID-19, the cardinal’s visit was an important one for the many prisoners who rely on faith and parish relationships to lead more positive lives following release.

Fr Chima Ibekwe worked closely with prison staff and the Pact team to arrange the visit, gathering a group of men in the chapel to meet the Cardinal and be heard by the most senior member of Catholic clergy in England and Wales. The meeting was a powerful example of the synodal process in action.

“Everyone here at Wormwood Scrubs embraced the Cardinal’s visit. The lads were so pleased that he sat with them. The support from not just the multi-faith chaplaincy but all the staff, including those with no religious faith, has touched my heart. We all worked together to make the visit a success,” said Fr Chima.

The Cardinal made time to speak at some length with prison staff over sandwiches. Pact staff and volunteers welcomed the Cardinal in the prison Visitors’ Centre, operated by Pact and home to the charity’s FamilySpace initiative, which supports families across London affected by the imprisonment of a close family member. On behalf of HMP Wormwood Scrubs, Father Chima presented the Cardinal with a picture that included the words from Matthew’s Gospel: ‘I was in prison and you came to visit me’.

Some of the prisoners spoke about how important family and even parish connections are while they are inside and the hope that these relationships can give them. The Cardinal reported that an important message for him was that the prisoners appreciated being acknowledged by parishes and would value being invited back to those communities when possible.

Pact’s CEO, Andy Keen-Downs, reported that Pact’s Faith in Action team is well-placed to help parishes become places where prisoners, people with conviction and their families can feel known and loved.

Readers can find out more about Pact’s work by contacting the charity’s Faith in Action team at parish.action@prisonadvice.org.uk

The Prison Advice and Care Trust (Pact) is an independent national charity that provides support to prisoners, people with convictions, and their families.

Founded in 1898 as the Catholic Prisoners’ Aid Society, the charity supports thousands of families each year and works in 55 prisons across England and Wales.

We work at the intersection of criminal justice, child and family welfare, and mental health and wellbeing. We support people to make a fresh start and minimise the harm that can be caused by imprisonment to people who have committed offences, to families and to communities.

Our vision is of a society in which justice is understood as a process of restoration and healing, in which prisons are used sparingly and as places of learning and rehabilitation, and in which the innate dignity and worth of every human being is valued.