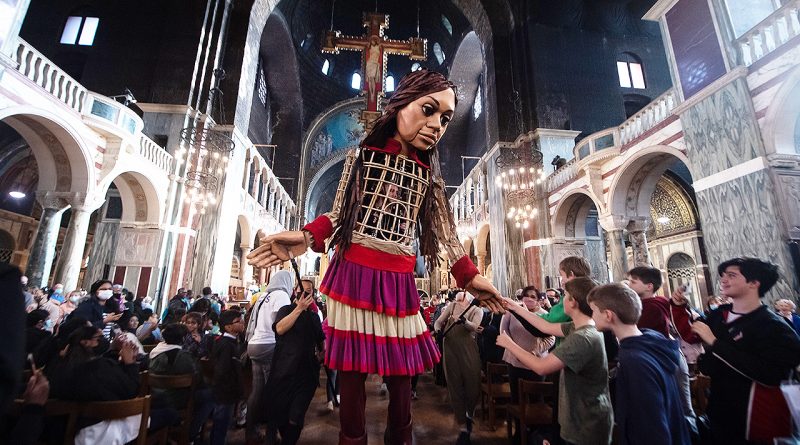 Cardinal Vincent Nichols has shared his thoughts after leading a service of prayer and reflection having welcomed Little Amal to Westminster Cathedral.

Little Amal is a 3.5 metre-tall puppet of a 10-year old unaccompanied Syrian refugee girl whose journey across Europe, from the Turkey-Syria border to Manchester, is intended to highlight the plight of unaccompanied child migrants and the dangers they face on the way.

“There’s something very creative in what we saw,” said His Eminence.

“Little Amal embodies a whole dimension of our human family that is travelling lost, at risk and in danger. And yet still with the kind of innocence that you would expect of a young child.

“There was a strong emotional presence and a pull that somehow, in her gestures particularly, was expressed. I think that touched everybody.”

The cardinal also commented that it was important that the church should be part of Amal’s journey.

“I think what was very fortunate, helpful, opportune, was the fact that she could come into the Church. As I said to her at the beginning, we’re welcoming you to the home of our hearts. It is here that we gather to speak from our hearts to the God who made us and who loves us and who wants us to thrive and be at our best,” said Cardinal Nichols.

“The second thing was that wonderful cross-section of people who were here – children especially – from so, so many different nationalities. And I could say to Amal, no matter where we come from, we find a welcome = and we want to extend that to you as well.Then there was, a mini pilgrimage. A pilgrimage in the footsteps of Saint Paul – a pilgrimage to the Lady Chapel.

“Now, Amal is a figure that represents children who have been separated from their mother. So to come to the Lady Chapel was to discover a motherhood of a different dimension that is never broken, never closed and never lost.I hope that speaks very eloquently to the heart.Then, of course, back to the sanctuary and to the singing of those two lovely choirs, but also to be the place where we celebrate the death and resurrection of Jesus.

“I think, also, of those two little presents at the end – a Guardian Angel and a birthday card – just perfect! It was a really beautiful moment.”

The cardinal added that he hoped people would take away from the Westminster encounter an increased awareness that we are all part of the same Christian family.

“The message is very simple… that people who are desperate for almost whatever reason, but certainly as a result of violence, persecution or absolute poverty – they are our brothers and sisters. That’s the message. And as Christians, in them, we are invited to see the person of Jesus. We have to let that rumble around in our hearts, our minds and in our conscience and say, “Can we not do better for these brothers and sisters of ours?”

For the full transcript of the cardinal’s interview, go to: https://www.cbcew.org.uk/cardinal-little-amal-embodies-a-dimension-of-our-human-family-that-is-travelling-lost-at-risk-and-in-danger/