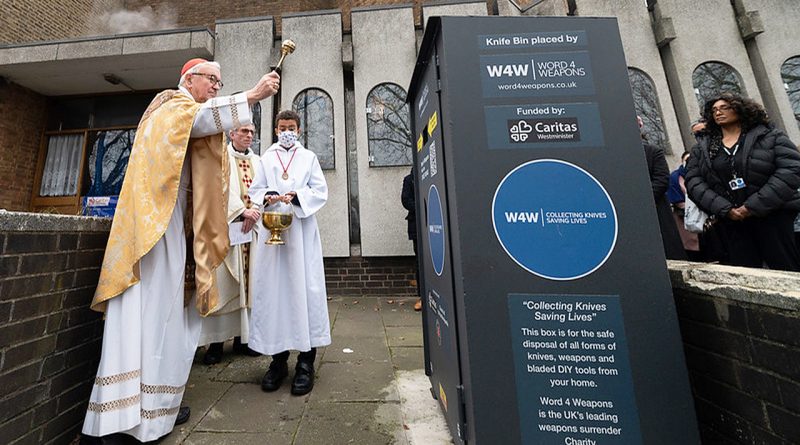 Yesterday Sunday 23rd January, Cardinal Vincent Nichols, the head of the Catholic Church in England and Wales, blessed a newly installed Knife Bin at St Paul the Apostle Church in Wood Green, in the borough of Haringey.

This bin, which has been provided by Word4Weapons and funded by Caritas Westminster, is a safe-disposal amnesty bin for knives and other bladed weapons. The bins are placed away from CCTV, with the aim of encouraging people to hand over knives that might otherwise be used in committing crimes, potentially causing serious injury or death.

The launch of the knife bin at St Paul the Apostle is one of the ways the Catholic Community in Wood Green is marking its 140th anniversary and 50 years of the current church building. Elsewhere, on 9th February another new knife bin will be launched at St Mary and St Michael Catholic church near Commercial Road – the fifth such bin provided by the partnership of Word4Weapons and Caritas Westminster.

Parish Priest Fr Perry Sykes said, “Anniversaries are, above all times of thanksgiving, when we look back and appreciate anew all that contributed to the growth and well-being of the Wood Green Mission. Those who formed that first community would be happy and gratified to see all that has resulted from such small beginnings. The installation and blessing of the knife bin by Cardinal Vincent yesterday is part of our continuing mission here in the community of Wood Green.”

The Mayor of Haringey, Adam Jogee, who attended the event, said, “I am grateful to St Paul’s Parish for the leadership it shows in keeping wood green and Haringey safe and I hope that all those have been affected by any issues linked to knife crime can feel that this is a safe opportunity to do away with their knives and move forward in a peaceful and safe way.”

Grace, the Vice president of the Society of St Vincent de Paul, a parish group reaching out to people experiencing difficulties, said: “In Wood Green and Tottenham we have a lot of issues with knife crime. Reaching out to the youth is going to help with people relinquishing their actual weapons. I think we’re doing a brilliant job and setting the stage for others to follow us.”

A year 11 student and member of the church choir said, “The knife bin is a really good idea-it can allow us to reduce the amount of knife crime going on which is very important”.

Lucia das Neves councillor for Woodside ward (which includes St Paul’s church) and cabinet member for health social care and wellbeing in Haringey said, “It’s really inspiring to see how this parish has engaged with the community on the issue of youth violence. I know that they’ve been really passionate about making a difference to young people. Installing this knife bin is a visual reminder of the community’s commitment to combatting violence and having a conversation about the issues.”

Minet Masho, Caritas Westminster Development worker said, “the ceremony yesterday, with the beautiful singing from the choir, was a very moving experience. What made it special was how the whole community came together, young and old, in support of the knife bin, as one way in which they can address the serious issue of knife crime in the area.”

Until 2020 knife crime in London had been steadily rising, reaching nearly 16,000 recorded offences in the twelve months to March 2020. In the following year to March 2021 this dropped to around 10,000, reflecting lower levels of crime generally due to coronavirus lockdowns, however 30 teenagers were killed in London last year, the majority having been stabbed. The problem of knife crime and the issue of young people routinely carrying knives is one that Caritas Westminster takes seriously as part of their mission to see all people living a life of dignity and worth.

The first Caritas Westminster knife bin was installed in Tollington Park in 2018 with two more in Harrow Road and High Barnet the following year. The latest figures from these bins shows a total of 447 knives and 107 other potential weapons had been placed in these bins – off the streets and no longer at risk of causing harm.

The parish communities at Wood Green and Commercial Road are each hoping to back up the knife bin with awareness raising activities in the coming months. Caritas Westminster supports this work, alongside other outreach projects to build resilient communities and lift people out of deprivation. They work with Catholic churches and schools in the Diocese of Westminster which covers most of London north of the Thames, and Hertfordshire.

Caritas Westminster is the official charity of the Roman Catholic Diocese of Westminster, covering most of London North of the Thames, and Hertfordshire.www.caritaswestminster.org.uk

Funding for the knife bins came from the St John Southworth fund, administered by Caritas Westminster