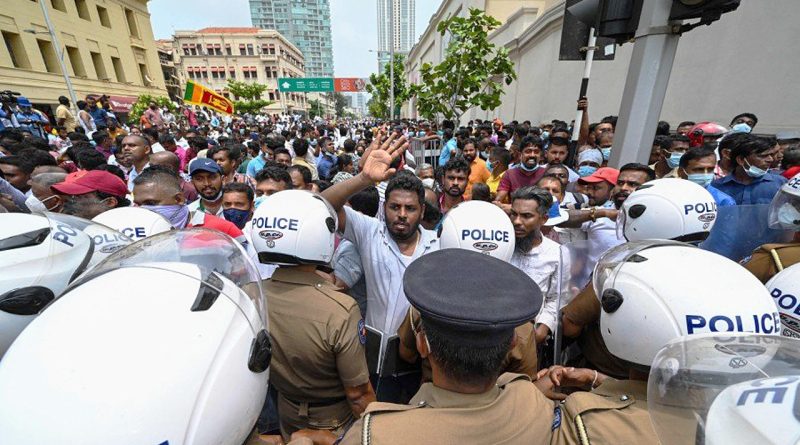 Following two days of violence in Sri Lanka and the resignation of the country’s Prime Minister – after months of overwhelmingly peaceful protests – the Catholic aid agency CAFOD stands with its local partners and Pope Francis in calling for peace.

“We support calls for an end to the violence and for the political leadership of Sri Lanka to rally together to urgently agree a peaceful resolution to the crisis, in accordance with the constitution.

“The Church in Sri Lanka continues to stand with the people who have been affected by the violence, and by the devastating economic crisis that led to the peaceful protests.”

At his General Audience on Wednesday, Pope Francis said: “I join religious authorities in urging all parties to maintain a peaceful attitude, without yielding to violence.”

“I appeal to all those with responsibilities to listen to the aspirations of the people and to ensure full respect for human rights and civil liberties,” added Pope Francis.

Faith leaders in the country have demonstrated their support for those who were peacefully protesting.

“Cardinal Malcolm Ranjith of Colombo has joined peaceful protesters on the streets along with many other bishops, priests, and nuns. They have also been visiting the injured in hospital,” said Mary Lucas.

Violence erupted on 9 May when a large group of government supporters, who had assembled at a rally at the Prime Minister’s residence, proceeded to march on two prominent protest sites, attacking demonstrators who had been protesting peacefully for several weeks.

The attacks sparked a wave of retaliatory violence, against the pro-government attackers and their vehicles, and other prominent officials and their properties throughout the night.

The violence has resulted in several deaths and hundreds of wounded.

In the evening of 9 May, Sri Lanka’s Prime Minister, Mahinda Rajapaksa, handed in his resignation. However, protestors continue to call for the resignation of his brother and President, Gotabaya Rajapaksa.

“The situation is very uncertain now, and the way Prime Minister Rajapaksa has resigned adds to that uncertainty,” said Jehan Perera, Director of the National Peace Council of Sri Lanka. “His departure has left a power vacuum. We are very worried; we really don’t know what is going to happen.”

The widespread – and overwhelmingly peaceful – demonstrations across the country are a result of Sri Lanka facing its worst economic crisis since independence from the British in 1948.

The collapse of the Sri Lankan economy has seen citizens facing spiralling price rises and unavailability of basic goods including food, cooking gas, medicines and fuel, and power cuts of up to 13 hours per day. A ban on chemical fertilisers also led to a big drop in agricultural production and a hike in food prices, which has pushed many families to the brink of coping.

The conflict in Ukraine has worsened the situation, as Sri Lanka exports 18 per cent of its tea to Ukraine and Russia, and imports 45 per cent of its wheat from Ukraine.

Just over two years ago Gotabaya Rajapaksa was elected President of Sri Lanka on the tide of a popular vote with a massive majority. The anger of the current protestors is rooted in the breakdown of systems of accountability and belief that government leaders – the President, his brother the Prime Minster, Mahinda Rajapaksa, and their families – have looted the economy.