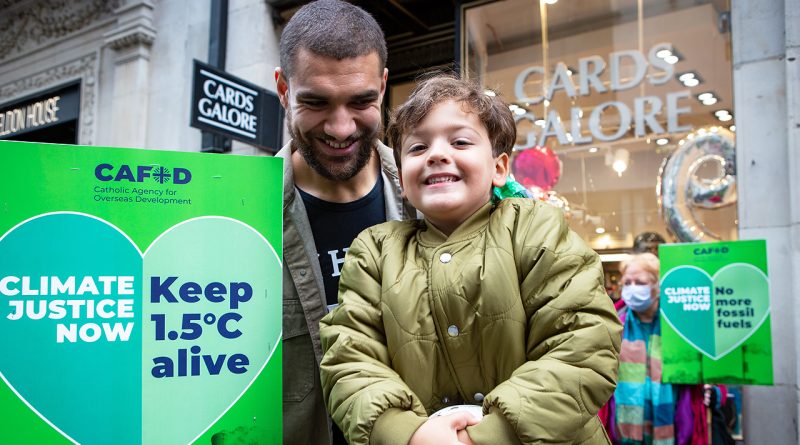 Hundreds of campaigners with the Catholic aid agency CAFOD have taken part in marches in Glasgow and London on Saturday 6th November, calling for climate justice.

They urged world leaders and negotiators at the COP26 climate talks in Glasgow to commit to ambitious plans and funding to keep global temperatures within 1.5 degrees of warming and called for increased support for the countries and communities suffering most from the climate crisis.

CAFOD Director Christine Allen, said: “The COP26 summit in Glasgow is due to end next Friday. There are only days left to ensure the planet is put on a path that can prevent irreversible climate change.

“The first week of COP26 has seen important announcements on issues such as limiting methane emissions, finances, stopping the funding of fossil fuel projects and halting deforestation. The progress that has been made is exciting. However, we need major breakthroughs in the final week of COP26 to limit global heating to 1.5 degrees.

“If we do not see commitments that keep the ambition of 1.5 degrees alive or that fund the poorest who face the reality of climate change now, the deals we have seen will be undermined”.

Lifelong friends Gemma Pacquette, 71 and Erma Richards, 71 travelled in from Kilburn in North London to join fellow CAFOD supporters winding their way through the City of London. Fighting for climate justice, is close to Erma’s heart – she discovered a beloved river that she learnt to swim in as a child, in St Lucia has dried up: “I feel very strongly about climate change. I was born in St Lucia. The river where I learnt to swim – I went back home ten years ago, and that river has dried up, its gone! That river meant so much to me. I would love my great grandchildren to be able to swim in rivers, like I did. I want them to be able to have the freedom I had experienced as a child.

Gemma said it was important for her to be at the climate protest in London and had a clear message for COP26 world leaders: “I want to see an action plan in the sense that in two years we will have done this, that and that. Then the next two years we will concentrate on that and that. Not just telling us “We hope to”. We are responsible to see that this happens.

Josh Grierson, 28, and his nephew Byron, 5 (pictured) also joined the London climate protest: “I wanted to be a part of the march because I think you’re either an agent of change or you’re condoning the equilibrium that we’re in now. I think if you don’t act then you can’t point fingers when nothing happens. So, I want to be here to have my voice heard,” said Josh.

He continued: “It’s always an amazing feeling to be united with people that have a shared common ethos. It’s only with numbers that you can create change.

And Josh’s five-year-old nephew, Byron had this simple and direct message: “Stop cutting down trees!”

In a rainy Glasgow, the spirits of Alex Ugoh, 19, weren’t dampened. A CAFOD climate campaigner from Rainham, East London, he said that young people must be heard: “I am here to represent the drive and enthusiasm of young people across the globe who want a more sustainable tomorrow. The opportunity to be surrounded by a community of passionate young adults focused on future-proofing their planet for generations to come, was something I simply could not pass up.”

Sophie Pereira, 18, a CAFOD climate campaigner from Colchester, Essex, was also at the Glasgow protests, she said young people have a right to influence the decisions of world leaders at COP26.

“We are living in a climate crisis, and I believe the youth deserve to be standing right next to the world leaders contributing to their decisions.

“As young people, we are the next generation. We will be living in the world that the generation before left us. Because of that, we deserve a voice and deserve to stand together and fight for the world we’re living in before it’s too late.”