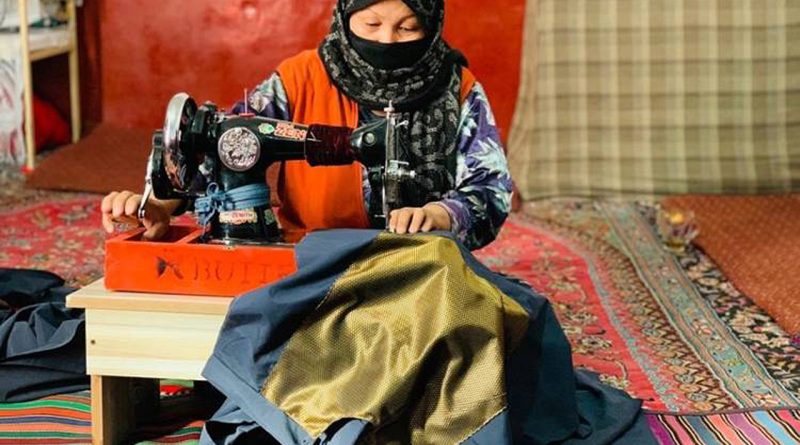 Generous contributions made to the CAFOD Afghanistan Crisis Appeal have helped thousands  to get essentials such as food, water and shelter, according to the leading Catholic charity.

“This emergency support is vital because it means ordinary people have the best chance of surviving the crisis in their country,” CAFOD said in a statement.

“One of the great challenges in the country at present is the status and life chances of women and young girls.

Outside of this emergency work you are helping to fund and as part of our long-term work in Afghanistan, dedicated teams of volunteers and professionals have been working with women in the northern Balkh province. Tailoring kits, weaving kits and embroidery kits have been distributed to women.

These kits are a powerful way for some of the most vulnerable members of Afghanistan society to make a living.”

“I previously believed that people couldn’t learn something new in adulthood,” says Farkondeh who started tailoring at 43. “However, the last two years of my life have proved that this is not true.

‘I started learning tailoring with a group of women of all different ages. I had to train, start my business and earn money all at the same time, because we are a family of nine and I am the only worker and had no regular income. After six months hard working, I learnt tailoring and was also given a tailoring start-up kit containing fabric and yarn.” Farkondeh received a tailoring toolkit through CAFOD’s partner.

Farkondeh told us that she also taught her new skills to her two daughters and bought them both sewing machines. “Together we sew clothes for local people, as well as at a nearby market,” she says.

CAFOD has pledged that it will not give up on the people of Afghanistan even though the situation in the country continues to deteriorate. The charity has been working in Afghanistan since the late 1980s.

“Unfortunately, the situation is still desperate. Many people are still struggling to get the food and fuel they need to survive or forge a living for themselves. Your generosity has helped so many but there is so much more we can do.        Janet Symes, CAFOD’s Head of Asia & Middle East Region

Distribution of food baskets and cash to vulnerable families

Each ‘food basket’ contains wheat, rice, pulses, vegetable oil, salt and sugar. The packages are designed to last a family for around two months.

CAFOD has been working through local partners to reach vulnerable households in Balkh province by distributing either food baskets or cash to buy food. CAFOD are also supporting people in urgent need with distributions of cash to buy food at local markets.

Thanks to your donations, CAFOD has been able to assist thousands of families with emergency food.

Each ‘food basket’ contains essential products like wheat, rice, vegetable oil, salt and sugar. They are designed to last a family for around two months. The priority has been to support families headed by women or by people living with a disability.

How is CAFOD responding to the earthquake in Afghanistan?

CAFOD is helping to provide food and shelter for people whose lives were devastated by the recent earthquake in Paktika province.

CAFOD’s local partner is already on the ground in Paktika province where it had been responding to the existing economic and social emergency. We are supporting earthquake affected families with emergency food kits.

Most of the casualties have occurred in this province and our local aid workers are already assessing the needs of affected families.

* Names have been changed to protect identities