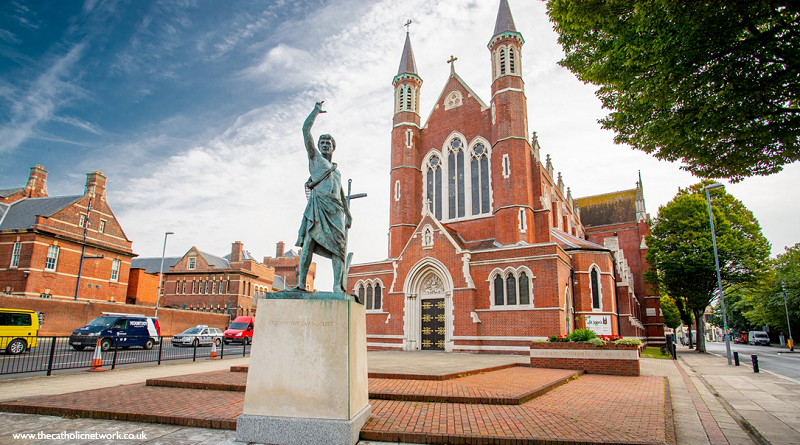 The Bishop of Portsmouth has said that the statue of St John outside his cathedral inspires his sense of mission.

“John, a son of Zebedee, was a fisherman before he met Christ. Identified in the gospel ascribed to his name as the “one Jesus loved,” said Bishop Philip Egan in his latest weekly e-newsletter.

“He was the only apostle who remained at the foot of the Cross. To him, Jesus entrusted this mother. With St. Peter, John was one of the first witnesses to the Resurrection”.

After the persecution of Herod Agrippa, in which his brother, James, was martyred, John travelled to Asia Minor where he composed his Gospel and the Epistles. He wrote the Book of Revelation whilst in exile on the island of Patmos. He died in Ephesus around the year 100.

“I love the statue of St. John that stands outside the Cathedral which portrays him vigorously preaching the Gospel to everyone passing by what is in effect a very busy road junction”, said Bishop Egan.

The bishop also drew attention to a sermon by St. John Henry Newman in which he speaks about the love of relations and friends and says this of St. John:

“St. John the Apostle and Evangelist is chiefly and most familiarly known to us as “the disciple whom Jesus loved.” He was one of the three or four who always attended our Blessed Lord, and had the privilege of the most intimate intercourse with Him; and, more favoured than Peter, James, and Andrew, he was His bosom friend, as we commonly express ourselves. At the solemn supper before Christ suffered, he took his place next Him, and leaned on His breast. As the other three communicated between the multitude and Christ, so St. John communicated between Christ and them. At that Last Supper, Peter dared not ask Jesus a question himself, but bade John put it to Him,—who it was that should betray Him. Thus St. John was the private and intimate friend of Christ. Again, it was to St. John that our Lord committed His Mother, when He was dying on the Cross; it was to St. John that He revealed in vision after His departure the fortunes of His Church.

“… We know he is celebrated for his declarations about Christian love. “Beloved, let us love one another, for love is of God. If we love one another, God dwelleth in us, and His love is perfected in us. God is love, and he that dwelleth in love dwelleth in God, and God in him.” [1 John iv. 7, 12, 16.] Now did he begin with some vast effort at loving on a large scale? Nay, he had the unspeakable privilege of being the friend of Christ. Thus, he was taught to love others; first his affection was concentrated, then it was expanded. Next, he had the solemn and comfortable charge of tending our Lord’s Mother, the Blessed Virgin, after His departure. Do we not here discern the secret sources of his especial love of the brethren? Could he, who first was favoured with his Saviour’s affection, then trusted with a son’s office towards His Mother, could he be other than a memorial and pattern (as far as man can be), of love, deep, contemplative, fervent, unruffled, unbounded?”

Bishop Egan said that today “would be a great day to pray for the mission of the Church in our Diocese”.