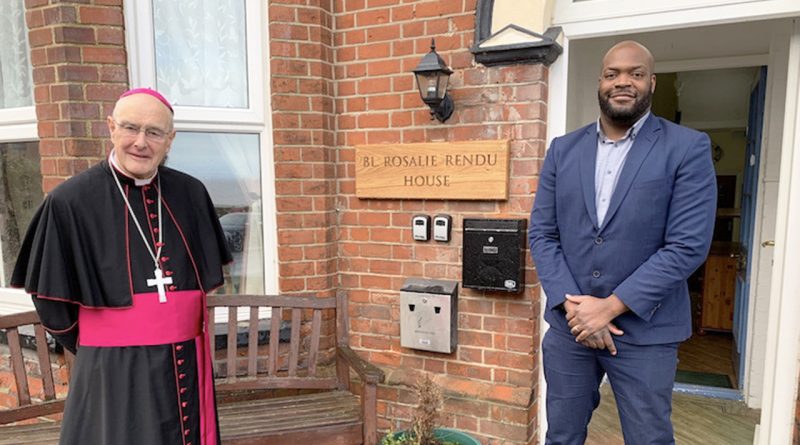 Society Project Manager Joey Garande, assisted by caretaker Liam Peers, showed the Bishop around the house in Cromer, which had been filled within a week of opening at Christmas and is now home to six individuals.

The Bishop brought with him Canon David Paul, Dean of St John’s Cathedral, who is at present opening the Cathedral as a night shelter of the street homeless, for the February 4 blessing. They were moved by the anonymous interview of a house resident who was preparing to leave after six weeks, with his life back on an even keel.

The Bishop blessed the house, including an icon of Blessed Rosalie painted and donated by Judith James. They then returned to Cromer church for refreshments and to meet conference members and guests. SVP Trustee Maurice Downey attended, along with Helen Voyce, now directing SVP social enterprise.

Since 2012, the North Norfolk Conference has been supporting street homeless people, both individuals and families in need of emergency accommodation. The temporary loan and leasing of a house between 2014 and 2018 developed into the current Project when the SVP Society Board of Trustees approved the purchase of St Vincent’s House in Sheringham.

This was commissioned in December 2019 to relieve homeless families who up to that time had to be housed in unsatisfactory conditions. For more than two years now the house has been operating continuously and sustainably at almost full occupancy and has helped more than 14 families and over 50 children live in normal safe conditions until being able to move on to a new permanent home.

Following the success of the Sheringham property, the SVP Society were able to authorise a project expansion to establish a second House, this time supporting a different category, single homeless individuals. Support needs for the single homeless can be more complex and the need for a live-in caretaker was identified.

Conference President Michael McMahon thanked Bishop Alan for a significant capital grant payment to the project from the Alive in Faith Outreach Fund and Canon David Longe, Rector of the local Matlaske Benefice (Church of England), whose parishioners have made significant donations supplementing funds from the St Joseph’s, Sheringham and Sacred Heart, North Walsham parishes.

Helen Voyce confirmed that the Society had included the procurement of a third house in the new 2022/23 budget year.

Jeanne Rendu, born 1786, was a member of the Daughters of Charity and received the name Rosalie. She spent over 50 years serving God and assisting the poor in the Paris streets, risking her life on the barricades during the bloody uprisings that took place in 1830 and 1848. She became known as the ‘good mother of all’, and in 1833 became the mentor to Blessed Frederic Ozanam, helping him and his friends to do good works, which is how the St Vincent de Paul Society started.

Pictured above is Bishop Alan with SVP Project Manager Joey Garande outside the new move-on accommodation for single homeless people.