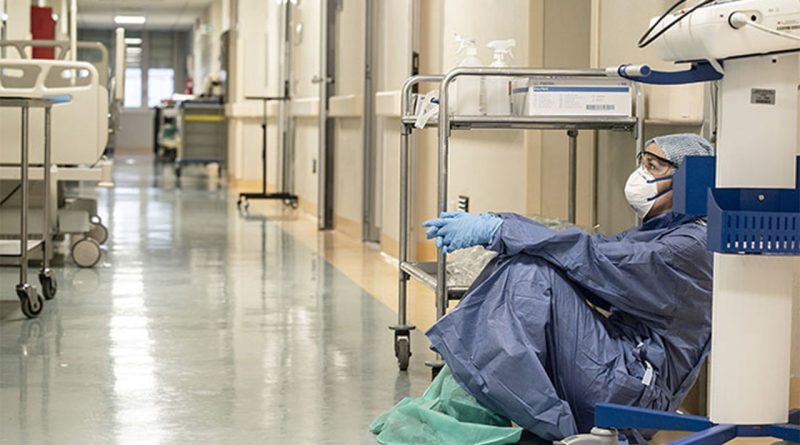 Not surprisingly, the focus of the current race to be UK Prime Minister has seen the two candidates focussing on rebuilding our country’s economy. From a Tory perspective, the prime solution to all societal ills is personal prosperity; a good, stable income for the individual creates a good stable tax return for government, and all can be well with the world. It’s an old, over-simplistic formula that ironically means even more to a Labour government – after all, more workers in well paid, sedentary jobs means not only more government capital but greater control over the workforce.

Of course there is nothing wrong with aspiring to get people into work, after all a living wage, property security and hope for the future ought to be fundamental human rights, just as important as free speech or fair treatment for all. It’s has also been the foundation stone of Catholic Social Teaching for more than a century and a half. Whilst the Fall of Adam has condemned us to returning to God through physical toil, Catholic social teaching was born in that moment when it occurred to the Church that a working life may be hard, but our masters were wrong to tell us that it also had to be without dignity.

The relationship between physical work and personal dignity ought to have improved in recent decades, given society’s obsessions with individual rights of all kinds, but truth is that the nature of work for the majority of us has deteriorated significantly. It’s wrong to assume that putting more money in people’s hands solves the problem, if nothing is done to address the worth of the work being done.

St John Paul II explained this ‘spiritual nature of work’ as the mechanism by which humanity is redeemed, and by which we can sanctify ourselves: “work is not merely about the toil or getting the job done … In work, thanks to the light that penetrates us from the Resurrection of Christ, we always find a glimmer of new life, of the new good. (Laborem Exercens. 27)

The great Dominican philosopher Fr Vincent McNabb also explained the modern work problem in very concise terms – Fr Vincent (1868-1943) devoted his life to the service of London’s poor and knew first hand that paying a living wage was only half the task. As he once famously noted of the Miracle of the Loaves and Fishes: “If the Eternal Wisdom, instead of miraculously providing bread and fishes, had provided money, St. John would have been unable to say that as much as each one wanted Jesus gave.”

One only has to listen to the aspirations of the two candidates to be our next Prime Minister to see this principle in action. Despite their repeated claims of working class, hard-working origins – neither candidate has ever ‘produced’ anything, both having scrambled very successfully up the financial services ladder from adolescence. Both have accumulated far more wealth than you or I, both joined the political party of the wealth creators, and both have made it perfectly clear in recent weeks that wealth creation and sorting out the Westminster accounts department is their primary focus. Even worse, you could sense the discomfort even being challenged on the need to address the cost-of-living crisis.

I’m sometimes advised not to judge people in such personal terms – but poverty and social justice are personal issues for those at the wrong end, so how our decisionmakers see the world, and our country, is actually fundamental to the solutions they will pursue and that affects us all, especially the most vulnerable.

In the recent head-to-head TV debate, all the participants tried to avoid personalising the discussion, but inevitably the rhetoric and wild promises gave way to eight minutes about the contrast between Liz Truss’s £4.50 earrings and Rishi Sunak’s £3,500 suit and £450 Prada shoes. Such things are not trivia – no job requires a £3.5k suit and Prada shoes, so these things are personal choices, wealth statements and indicators of what you value. This in turn reflects how you would like society to see you, and how you in turn see society.

Mr Sunak’s belief that we should all have the opportunity to swan around in expensive suits and Prada shoes may seem like a noble ambition, but it’s completely unsustainable for a whole range of reasons – not least that the limited resources of our planet means that excessive winners will mean excessive losers. Thus it was noticeable – but not in least surprising – that all in the recent political rhetoric there has been a distinct absence of reference to actual people, and specifically to people who produce ‘things’ rather than ‘tokens of things’. Wages in this sector have been stagnant for years, and that’s why rail workers have gone on strike, and our social and health services are collapsing.

Just this morning British Gas owner Centrica announced that it is reinstating its shareholder dividend payout after posting £1.3bn profit for the first six months of this year – up from £262m during the same period last year. The company even had the audacity to tell its shareholders that they could expect an even bigger dividend for the second half of this year due to putting up its energy prices. This comes on the same day that we’re hearing your annual household energy bill could hit £,4000 by January!

Compare that to the notice sent this month by NHS Wales Shared Services Partnership (NWSSP) to its NHS staff: “Dear colleagues, Things are difficult for many of us, with the ongoing cost of living crisis. I have included some great tips for parents from the Martin Lewis website, on surviving the school holidays, and some other online offers for reduced cost or free meals for children … you will also find information about the Money Helper impartial advice and support website, including debt support and tools and resources to help manage your finances. There is also information about how to access a foodbank.”

Accessing foodbanks is now a fact of life for many thousands in the UK, even for those in full time employment. This says a huge amount about how we’ve ceased to understand the dignity and purpose of work, and the veneer of a hardworking, successful British society that we’ve thrown over this problem is in many ways worse than the raw capitalism of our Victorian forbears.

Pope Francis has noticed his divisive trend also, and describes in his own inimitable, blunt language as an “economy that kills”.

“Today everything comes under the laws of competition and the survival of the fittest, where the powerful feed upon the powerless. As a consequence, masses of people find themselves excluded and marginalized: without work, without possibilities, without any means of escape.” (Evangelii Gaudium, 53).

His Holiness says that our current socioeconomic system “is unjust at its root.”

“some people continue to defend trickle-down theories which assume that economic growth, encouraged by a free market, will inevitably succeed in bringing about greater justice and inclusiveness in the world. This opinion, which has never been confirmed by the facts, expresses a crude and naïve trust in the goodness of those wielding economic power and in the sacralised workings of the prevailing economic system. … Almost without being aware of it, we end up being incapable of feeling compassion at the outcry of the poor, weeping for other people’s pain, and feeling a need to help them, as though all this were someone else’s responsibility and not our own. The culture of prosperity deadens us …” (Evangelii Gaudium, 54).

After a brutal week of blue-on-blue confrontations between Liz Truss and Rishi Sunak, we certainly learnt that our new Prime Minister’s prime focus is going to be on economic growth and fiscal management. No mention was made of the NHS, where 6.6 million people are waiting for operations and a 24 hour wait for an ambulance is now a reality.

NHS digital figures suggest that there are currently 38,972 nursing and 8,016 doctor vacancies, though the real figure is thought to be 50,000 and 12,000 respectively according to figures prepared for MPs by the Nuffield Trust.

By last weekend both candidates had been embarrassed into making some reluctant promises regarding the NHS, but both reverted to offering small pay rises to workers as the route to tackling the deeper malaise.

The late Aneurin Bevan dreamt of a National Health Service where “the glory of the profession is that a doctor should be able to meet his patients with no financial anxiety”, and he would be mortified to hear about the present state of his beloved NHS. He would also have reminded us that our health service is the canary in the mine when it comes to the wider moral and spiritual health of society, and our new Prime Minster will need to take urgent heed of the warning signs.

He or she would also do well to ponder the words of our Pope: “A financial reform open to such ethical considerations would require a vigorous change of approach on the part of political leaders. I urge them to face this challenge with determination and an eye to the future, while not ignoring, of course, the specifics of each case. Money must serve, not rule! The Pope loves everyone, rich and poor alike, but he is obliged in the name of Christ to remind all that the rich must help, respect and promote the poor. I exhort you to generous solidarity and to the return of economics and finance to an ethical approach which favours human beings.” …” (Evangelii Gaudium, 58).