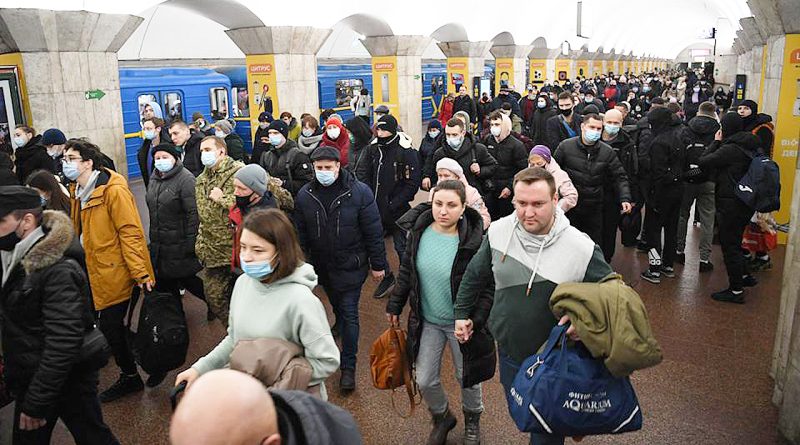 Each year for the past decade or so, as I’ve edited the 1,000 or so pages of the Official Catholic Directory of England & Wales, I’ve always looked in fond bewilderment at the three modest pages entitled Ukrainian Catholic Eparchy of the Holy Family of London. Created in 1957 to serve the faithful of the Ukrainian Greek Catholic Church in England and Wales, it only became and Eparchy (a formal province of the Orthodox church) in 2013, and currently serves 34 Mass centres around the UK, as well as it’s mother church – The Ukrainian Catholic Cathedral of the Holy Family in London’s Mayfair.

I say ‘fond bewilderment’ because my own Irish Catholic roots and mythologies have always seemed a world away from the heady Byzantine rituals, elaborate regalia and far distant roots of the Orthodox Church. But war, as they say, changes everything and the terrifying events of the past few weeks, days and hours have thrust the plight of the Ukraine and its people to the front of everyone’s minds. I no longer look on in bemusement, but in profound and humble admiration.

Over the past few weeks media commentators and politicians have had to grapple with the complexities of unfamiliar names, uncertain regional boundaries, a history that few seem to have studied in any great depth and now he horrors of invasion. Suddenly the world has woken up to the plight of the Urkainian people, but few of us will be aware that the Catholic faithful of this beleaguered region also have a story to tell. Their suffering goes back centuries, with Russia as the main protagonist, and the systematic persecution of Catholics has been inextricably linked to the territorial disputes that have given rise to the present crisis.

Russia expanded its western borders aggressively throughout the 17th and 18th centuries, annexing huge swathes of Eastern Poland and smashing the Catholic faith as it went. The Russian czars wanted to bring all Eastern-rite Catholics into the Orthodox Church; Catherine II suppressed the Greek Catholic church in Ukraine in 1784 and Nicholas I did the same in Belarus and Lithuania in 1839. Alexander II did too, in the Eparchy of Chelm in 1874, and officially suppressed the Eparchy in 1875. The Uniate Church (later the Ukrainian Greek Catholic Church), in steadfast communion with the Holy See, was a particular target and was suppressed ruthlessly, before being abolished entirely by the act of the Synod of Polotsk in 1839.

The history of the Catholics of this region is littered with atrocities and martyrdom – the forced conversion of the Eparchy of Chelm, the Pratulin Martyrs, the four Redemptorist martyrs of Ukraine, the victims of Stalinist persecution and the murder of all the Catholic bishops of Ukraine in 1945. The deeper you dig, the longer and more heart wrenching the list gets. Stalin in particular saw the Catholic Church as the prime defender of a Ukrainian territory that he wanted desperately to secure. His collectivisation of the people’s farms and confiscation of their grain from 1932-1933 led to the forced starvation and it is said the death of some ten million Ukrainians. In 1939 he sent the Red Army in to smash the Church, and liquidate it by terror if needed. Convents, schools, hospitals and many Catholic churches were burnt to the ground, half the Catholic clergy was imprisoned and others, as well as lay Catholics, were severely flogged, terribly tortured and even murdered.

Such was the extent of atrocities committed against the Catholics of the region that Pope Pius XII felt obliged to issue an encyclical – Orientales Omnes Ecclesias – declaring the support of Rome for the faithful of the Ukraine.

“We address all of you, Catholics of the Ruthenian [Ukrainian/Belarusian] Church. We share your sorrows and afflictions with a father’s heart. We know that grievous snares are being set for your faith. There seems ground for fear that in the near future still greater hardships will befall those who refuse to betray their sacred religious allegiance. For that reason we even now exhort you in the Lord, beloved sons, to be terrified by no menaces or injuries, to be moved by no danger of exile or risk even of life ever to abjure your faith and your fidelity to Mother Church,” said Pius.

Decades later, when Pope St. John Paul II paid a formal visit to the Ukraine, he beatified 28 Greek Catholic martyrs, 27 of whom had died during persecution of the church in Soviet times and one nun who died in 1918 when western Ukraine was part of Poland. When he first arrived in Ukraine, John Paul said that he was “just a pilgrim” and stressed that this visit had no political overtones, but when he congratulated the Ukrainians “from Simferopol and Odessa to Kharkiv, from Donetsk to Lviv” he was clearly and very publicly supporting the inviolability of the current borders of the Ukrainian state, and its desire to build its future as a European independent state.

As we know only too well, the current Russian President cares little for the murky and shameful areas of his nation’s history, instead preferring to draw his battle lines on the primacy of past Russian ownership of the Ukraine, but that ceased 23 years ago when Ukraine finally gained its independence following the collapse of the Soviet Union. Some kind of peace ought to have followed but in 2016 Russia annexed the Crimean Peninsula and immediately set about supporting minority Russian separatists who proclaimed ‘people’s republics’ in the eastern regions of Donetsk and Luhansk, together known as the Donbas.

According to the United Nations this renewed and unjustified Russian aggression – which the Ukrainian Catholic bishops have condemned recently as a “Kremlin-led war” – has already internally displaced  some 1.5 million people and killed at least 14,000.

Today’s images of the Russian invasion, and the harrowing photographs of warfare and innocent Ukrainian citizens fleeing for their lives, have understandably brought back further painful memories for many Catholic Ukrainians. One priest I spoke to said that there was tremendous fear of what the Russians might bring – under Soviet Communism it was impossible to even admit to having a Catholic faith and anyone found to have any belief in God could lose their jobs and property, and liturgies and the Mass had to be celebrated in secret, often outdoors and at night. Memories and fears like that linger on for generations, and even seep into the wider national consciousness.

As I write these lines the news is worsening by the minute. The full-scale invasion of Ukraine could well explode into a pan-European – and potentially even global – war. At the very least it will throw European economies into chaos and create a calamitous refugee crisis. Beleagured Ukraninan president Volodymyr Zelensky echoed his country’s brave history when he said earlier this week: “”We don’t need any war – hot, cold, hybrid. But if troops attack us, if they try to take our county – our freedom, our lives, the lives of our children – we will be defending ourselves. As you attack, it will be our faces you see, not our backs.”

Beyond such noble rhetoric the greatest and maybe only remaining hope for peace is prayer. Bishop Kenneth Nowakowski, The Ukrainian Catholic Bishop of the Holy Family of London, this week stressed the need for calm and de-escalation.  In a message for the Catholic community in England and Wales thanking them for their solidarity and calling for prayer and support he said: “We are seeing the escalation of war that has been waged for the last eight years in Ukraine, and we need prayers, we need calm and we need support. I ask you to continue to hold Ukraine in your prayers so that no more families have to mourn the loss of their sons and daughters in this war, both from the Ukrainian side and, of course, from the Russian side as well.”

There is little more that I can add to that right now, except to offer up my profoundest prayers for the brave people of Ukraine, and beg that you do the same.

2 thoughts on “As the Russians invade, history seems to be repeating itself endlessly for the brave citizens of Ukraine, says Joseph Kelly”