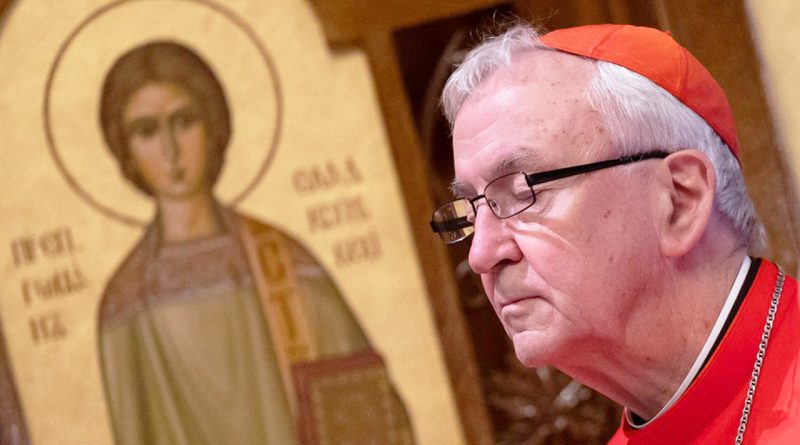 Cardinal Vincent Nichols has urged the Catholic community to pray for peace in Ukraine as Western nations warn that Russia could invade its neighbour at any time.

On Friday, 11 February the UK advised that all British nationals should leave Ukraine immediately.

Cardinal Nichols, President of the Bishops’ Conference, asked Catholics to pray to Saints Cyril and Methodius, the Patron Saints of Europe treasured by all Slavic peoples, that their prayers of protection might “save their beloved people from warfare and bloodshed.”

“Saints Cyril and Methodius, pray for us in these days of great danger.”

Meanwhile, Pope Francis has also renewed his prayers for the tense situation in Ukraine. Speaking on Sunday at the Angelus in St Peter’s Square, the Pope described the news coming out of Ukraine as “very worrying”.

He entrusted the situation to the intercession of the Blessed Virgin Mary, and appealed to political leaders to spare no effort to seek out peace.

“The news coming out of Ukraine is very worrying. I entrust to the intercession of the Virgin Mary, and to the conscience of political leaders, every effort on behalf of peace. Let us pray in silence.”

At the end of January when Pope Francis called for a day of prayer for peace in Ukraine, Bishop Kenneth Nowakowski, the Eparchial Bishop of the Ukrainian Catholic Eparchy of the Holy Family of London, spoke to us about the alarming situation.

Orthodox Patriarch Bartholomew I has added his influential voice to those of several world leaders calling for the “preservation of peace in Ukraine.”

Speaking on Sunday following the celebration of the Divine Liturgy, the Ecumenical Patriarch encouraged all people to pray fervently for peace and expressed his firm opposition to a “new war in Europe.”

Patriarch Bartholomew recalled that peace is a choice that must be shared by everyone engaged in the crisis.

“The possibility of a new war in Europe, resulting from the escalation of violent rhetoric and militarisation of the borders between Russia and Ukraine, should be unequivocally opposed. We call for enduring peace, stability and justice in the region.”

The Patriarch expressed his belief that dialogue is the only path toward peace, since it “abolishes the conditions that lead to violence and war.”

“We call upon all parties involved to pursue this path of dialogue and respect for international law, in order to bring an end to the conflict and allow all Ukrainians to live in harmony. Arms are not the solution.”

Patriarch Bartholomew added that “silence and indifference are not an option” and urged all parties to remain vigilant and strive for peace.