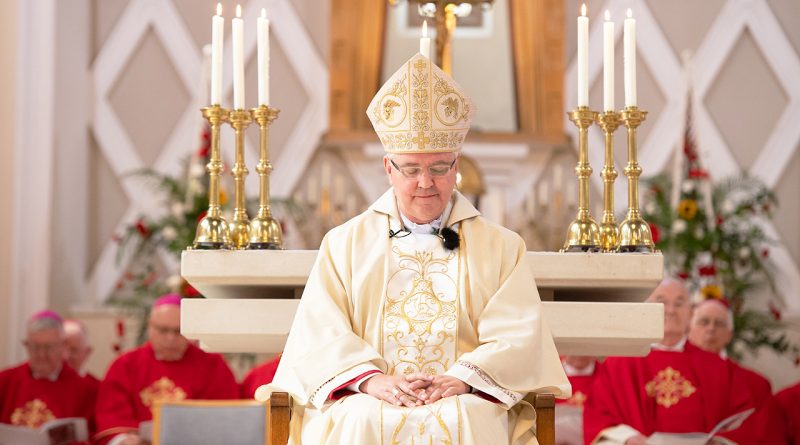 Archbishop Mark O’Toole yesterday travelled to Rome in preparation for the celebration of the Solemnity of the Apostles Peter and Paul on Wednesday. He will join Pope Francis for the Pontifical Mass of the Feast during which the pallia are blessed and presented to new Metropolitan Archbishops.

St Peter and St Paul stand as the two great pillars of the Church, for their work of carrying the Good News of Jesus Christ to the known world.  Through their fidelity to Jesus, their travels and their tireless witness, they planted the seedbed for the growth of the kingdom of God.

On Wednesday Pope Francis will preside over the Mass of the feast during which the pallia are blessed.  The pallia are woollen scarves worn around the neck on top of the Mass vestments of Metropolitan Archbishops.  They are a circular band about two inches wide, worn about the neck, breast, and shoulders, and having two pendants, one hanging down in front and one behind.  They are decorated with six small black crosses — one each on the breast and back, one on each shoulder, and one on each pendant. The crosses on the breast, back, and left shoulder are provided with a loop for the reception of a gold pin set with a precious stone as a reminder of the crucifixion of Jesus.

The use of the pallium is reserved to the Pope and Metropolitan Archbishops. Worn by the Pope, the pallium symbolises the plenitude of pontifical office; worn by Archbishops, it signifies their participation in the supreme pastoral power of the Pope, who concedes it to them for their proper Church provinces.  Its use can be traced back to the 4th century where Pope Marcus (336) conferred the pallium on the bishop of Ostia.

On Tuesday evening the new pallia will be laid before the tomb of St Peter, where they will remain until the Pontifical Mass the next day. Until recently the Pope placed the pallium on the shoulders of the new Archbishops at the Mass.  In a recent change to the ceremony, Pope Francis passes the pallium to the new Archbishops privately after the Mass.  The Archbishops then bring the pallium back to their  Metropolitan Province where it is formally conferred on them by the Papal Nuncio, among their flock, in a separate ceremony.

A date has yet to be fixed for the imposition of the pallium on Archbishop Mark, but it is anticipated that it will take place in the autumn.  You can join the live feed from the Pontifical Mass in Rome at 8.30am (UK Time) on Wednesday, by clicking here.