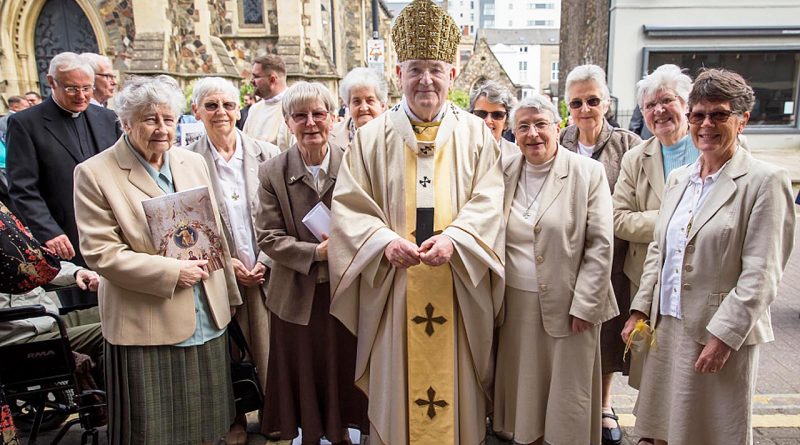 On Saturday 21st May representatives from parishes across the diocese gathered at St David’s Metropolitan Cathedral to join Archbishop George Stack for a Mass of Thanksgiving for the 50th anniversary of his priestly ordination.

Archbishop George was himself the principal celebrant at a celebration marked with a great sense of joy.  The Mass started with the hymn “Lord, You give the great commission”, a reminder that the call to priesthood, the call of any Vocation always comes from the Lord and is always at the service of the Great Commission found at the end of St. Matthew’s Gospel.

During the homily the Archbishop reflected that “The privilege of the priest is to call people to worship not just in words but in action too.” He went on to say that a priest’s life is to be “… a living sign of the presence and the care and the love of God to the people he is called to serve”. In reference to his forthcoming retirement with the installation of Archbishop-elect Mark O’Toole on June 20th, he gave thanks for his time in Wales.

“I am pleased and grateful that in this next phase of my life I am going where I do want to go whilst remaining in this part of Wales which is very close to my heart.”

As the celebration concluded Archbishop George offered his personal thanks to all religious, laity and clergy for the support they have shown him in the past 11 years as Archbishop, and for all who he has encountered in the past 50 years.  As a token and expression of his thanks to the diocese, he gifted the chalice given to him by his family on the occasion of his ordination to the treasury at St David’s Cathedral.  As a round of applause filled the cathedral, the Archbishop could just be heard saying to Canon John Kelly, Provost of the cathedral, “I designed it myself and was there when it was being made”.

As Archbishop George prepares to enter into the next phase of his life and his ministry, we say ‘Ad multos annos’ and thank you for laying down your life for the sheep.

Parish Priest at Our Lady Help of Christians, Kentish Town 1983-1990

Appointed Vicar General of the Diocese of Westminster 1990-1993