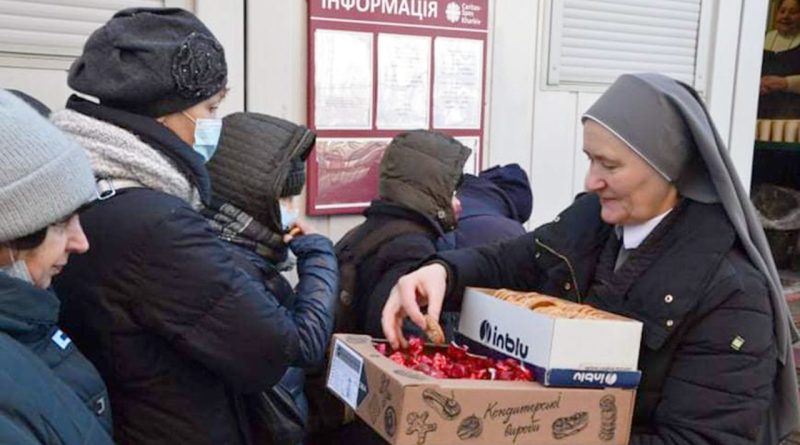 With the crisis deepening following the Russian invasion of Ukraine on Thursday, the Pontifical Foundation, Aid to the Church in Need (ACN) is committing €1 million to help the Church in the country at this critical time.

The diocese of Kharkiv in Eastern Ukraine will receive emergency aid that will be used to provide heating, lighting, water and food.

The funding will also enable the priests of the diocese and members of religious communities, to continue their vital ministry to those struggling to make ends meet.

Speaking to ACN, Bishop Pavlo Honcharuk of Kharkiv said, “The situation is getting worse every day. We live now from hour to hour.

“Prices are rising, especially for essential goods. The situation in the diocese is very difficult.”

The charity will also be providing essential aid for the four Greek-Catholic exarchates and the two Roman-Catholic dioceses covering the eastern regions of Kharkiv, Zaporizhya, Donetsk, Odesa and Krym.

Speaking to Vatican News, the National Director of Aid to the Church in Need UK, Neville Kyrke-Smith said, “Solidarity is something that really matters and I think this emergency aid we’re getting out now, on top of our normal aid, is absolutely vital as a sign of solidarity and prayer but (also) psychologically, mentally, spiritually for our dear friends in Ukraine.”

Mr. Kyrke-Smith has been travelling to Ukraine since 1991 when the iron curtain fell, and he noted that people’s faith has come alive since then.

“The Ukrainian Greek Catholic Church, a Church of the Martyrs has grown, the Latin Rite Church has grown, the Orthodox Church; Ukraine is probably 85% Christian,” he said.

During the General Audience on Wednesday, Pope Francis invited everyone to make 2nd March, Ash Wednesday, a Day of Fasting for Peace.

“I encourage believers in a special way to dedicate themselves intensely to prayer and fasting on that day. May the Queen of Peace preserve the world from the madness of war,” he said.

Commenting on this day of solidarity, the ACN National Director said, Pope Francis, is a “bridge-builder.”

“I think you have to understand that Ukraine is not just a geopolitical fault line, it’s also a religious fault line between East and West, and this will worry everyone involved, I’m sure the Orthodox and Catholics alike, and Pope Francis will be aware of that,” he said.

Mr. Kyrke-Smith underlined that the growth in faith in Ukraine “should really encourage us, it should be a challenge to us to take our faith more seriously and what really does matter; it’s shining a light in the darkness and we have to do that on Ash Wednesday and in the days, weeks, months ahead as well.”