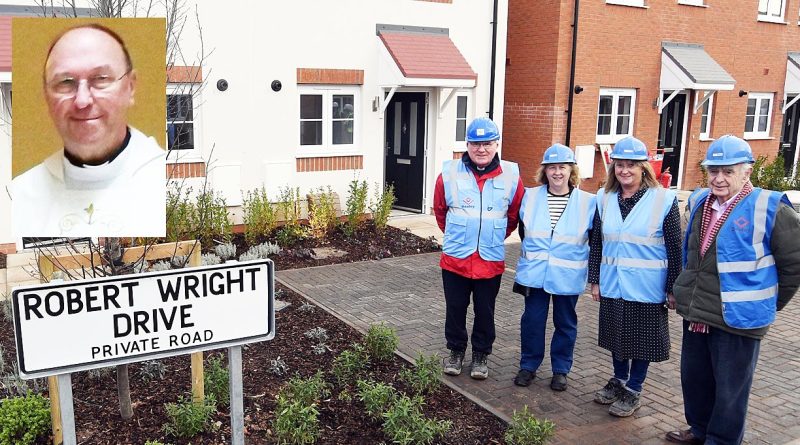 The impact a former Coventry priest had on his local community has been recognised with a road named in his honour.

Father Robert Wright – who was fondly known in the local Wyken community as Father Bob – passed away last year at the age of 68 and had called St. John Fisher’s Church home for a quarter of a century.

Robert Wright Drive can be found on a new housing scheme in the area being delivered by Deeley Group’s Affordable Living division.

The development is being delivered in partnership with housing provider Stonewater and will see the construction of 39 affordable new homes on Tiverton Road.

Robert was born in Hillfields in 1951 and ordained as Roman Catholic Priest in 1977. He served in Bicester, Nuneaton, Redditch and as Chaplain to the West Indian community in Birmingham, before returning to his home city of Coventry as Parish Priest of St John Fisher in Wyken in 1995.

He was a lifelong Coventry City fan and a season ticket holder for many years, attending home games when his parish commitments would allow. He ensured the church played a key role in the community and the church was a caring, inclusive and supportive place to worship and learn.

Liz Carr, Robert’s sister and a former teacher at St Augustine’s School, said: “We were delighted to hear that a road was being named after Rob, especially given its proximity to St. John Fisher‘s Church, his home for 25 years.

“He spent many happy years there, serving his parish and the local community, devoting his life to his ministry.

“He was especially happy given that Coventry was his home town, and being a lifelong supporter of Coventry City, he could easily make the home games and get back for Saturday evening mass.

“Whilst he would have been embarrassed at the thought of a road being named after him, his family and friends are really proud, as it is testimony to his hard work and commitment, and the regard he is held in, by all those who knew him.”

Peter Deeley, managing director of Deeley Group, added: “We have been working in the community here in Wyken for many years and for the last quarter of a century Father Bob has been right at the heart of that community.

“It is fitting and rightful honour for a great man who had such a profound impact on those he met and supported during his life. We hope that he would be supportive of our development at Tiverton Road and the creation of new affordable homes for the community which held him in such high regard.”

The new development at Tiverton Road will comprise of 23 affordable rented and 16 shared ownership properties, which will be a mix of two, three and four-bedroom homes.

Matt Crucefix, Director of Development (South and West) at Stonewater, said: “Building new homes should be centred around tackling local housing demand, whilst also enabling new residents to embed themselves within the existing community and its history.

“Naming one of the development’s roads after this highly respected individual is not only a great way to continue celebrating his work in the area but also presents an exciting opportunity for community building with both new and existing residents.”