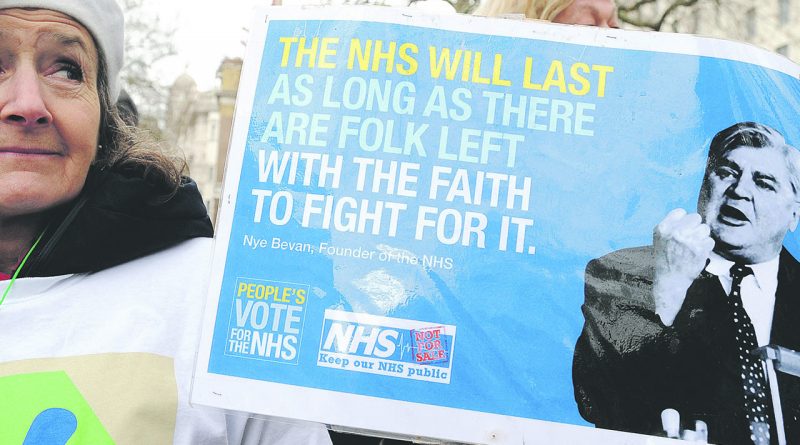 After almost two years of Covid-19, there was understandably every hope that the autumn would see some kind of return to ‘normal’ life. But with pupils back in schools, and workers being pressured into returning to commuting and offices, it was inevitable that there would be some kind of increase in the numbers. With the government struggling over plans A, B and even C, it’s becoming apparent that another lockdown could be as close as a month away.

For a National Health Service battered and exhausted by three waves of a pandemic, and an epic backlog of patients, the prospect of a winter of overload and a spiralling death toll is hard to imagine, let alone plan for. But the roots of the NHS crisis were evident long before the pandemic arrived.

Back in January 2017, in a quite extraordinary fit of naïvety, the then Health Secretary Jeremy Hunt stood up in parliament and had the gall to blame the general public for a collapse in NHS emergency provision, claiming that our hard-pushed casualty departments were being effectively clogged up with timewasters.

Mr Hunt was probably right that a lot of the people hanging around awaiting treatment shouldn’t be there at all, but frankly it was highly disingenuous to blame us for that. As anyone who’s ever rung a doctor’s surgery or the NHS helpline will know, first contact services are only too quick to pack us off to A&E, if they’re not advising us to just go home and take an aspirin.

Forgive me for harping on about a rose-tinted past, but time was when you could ring your GP any day or night, at time, and he or a colleague would come straight to your bedside. For years we’ve heard governments, and many doctors, whingeing about stress, lack of resources, the utopianism of Aneurin Bevan, and the inability to provide this basic social healthcare service in the so-called modern age.

How ironic that, in 2021 – even in the midst of a pandemic – you can get a washing machine engineer to your house within an hour, and a car mechanic within 40 minutes, but the GP network is in a state of collapse.

My own local GP service is a textbook example of the malaise that is now blighting this whole sector. In my small town the GP surgery was for decades a tiny terraced house, with a long queue up the street every morning. My doctor – who was over 6 ft – operated out of the small back box room, which was cramped, unhealthy for him and very poorly equipped. We moaned a lot about that, and having to sit on the outside wall in the freezing cold to get a cure for a chill, but see a doctor you did, and you walked away with advice or a prescription.

After years of campaigning, we finally got a fantastic new community health centre – bespoke built and with every modern facility and service imagineable. There was a not unreasonable expectation that as a consequence healthcare, and the wellbeing of the local population, might improve as a consequence. Well, along with the new build, fancy equipment and countless departmental signs came a new kind of local health service – digital booking in screens, online self-diagnostics, mind-numbing piped music, endless videos about flu jabs, severely limited appointment times and – most astonishing of all – a noticeable absence of doctors.

Bad as it may have seemed to the corporate eye (most of whom, of course, never have to resort to the NHS), the old surgery put a person in front of a doctor, a remedy on the table, and had a good awareness of the health, or otherwise, of the local neighbourhood. Today many of our otherwise excellent multi-million pound community health centres are sinking badly under the burden of enforced practices, targets and uninformed expectations from afar.

But please don’t get me wrong – I know my local GPs well and it’s not their fault; in fact what happened in my town is symptomatic of the central flaw at the very heart of the modern NHS. My old terraced house local surgery was actually founded by an illustrious local family of Catholic doctors, who had a heartfelt vocation to help their local community, and they ran the operation on a shoestring along lines informed directly by principles of Catholic social justice. After their retirement the surgery was taken over by a loose confederation of Christian doctors, who took the same principles of service forward, as anyone in the town can testify.

This small but determined group invariably went far beyond the normal requirements of community service, and had a commitment to their patients that was quite extraordinary – in particular I can say that I owe my life to their swift and unilateral actions on two occasions. Who can blame them for fighting for, and accepting, a smart new health centre, and resources they could only dream of.

But this is the NHS, and other minds have always thought they know far better than those on the ground. I know that my local GPs, like most around the country, have been utterly overwhelmed by methodology, obsessions with budgets and targets, monitoring and the general choking paraphernalia of tinkerers and bureaucrats. Let’s take a look at a few NHS figures – doctors’ wages in the NHS account for around £8.2billion per year, while the non-medical NHS infrastructure support bill comes out at a disproportionate £5.9billion per year. Frontline paramedics – qualified ambulance staff – account for just £681 million per annum. It doesn’t take a politician or an academic to work out that there’s a significant white collar overload going on here.

Sadly this is a common ailment (forgive the pun) of modern government, or rather the modern civil service, which actually runs our governments. A leading educationalist said to me recently that the endless fixation with SATs and other pupil tests in the UK was not actually about measuring the ability or failings of pupils, but rather about keeping a check on the abilities or failings of our disintegrating teacher population. I can’t help feeling that the NHS has got itself in a very similar fix.

Last year, for instance, some 53 million aspirin and paracetamol tablets, readily available over the counter in supermarkets and pharmacies, were prescribed by doctors, at a cost to the taxpayer of around £112.3 million. Now clearly that’s bad, but surely it’s a relatively easy fix – you just need to tell doctors to cut it out. But these days we can’t just do that – we need to create systems and infrastructures, supported by endless spreadsheets and projections, just to tell a bunch of people to lay off doling out the aspirins. I know it will never happen, but I’d dearly love to have a chance to help sort out the NHS, as it seems a fairly simple fix to me – our doctors are intrinsically concientious and person-centred individuals, who certainly used to be well able to be left alone to do the job of keeping us healthy without all this top-heavy and costly state interference.

If the results of government tinkering with the NHS had produced any meaningful benefits, or a healthier nation, we probably wouldn’t have much sympathy with our GPs and health workers, but those of us now in our later years, who rely on such services, and who still hanker after Bevan’s Jerusalem, are angry because there WAS once a better way. After the landslide Labour victory in the 1945 general election, Aneurin Bevan was appointed Minister of Health. At that time the health service was in a similar mess to today, being controlled mainly at local level by councils with hugely variant attitudes and priorities. Bevan took a fresh look at the possibilities and the many power groups and decided that, instead of giving local authorities a lead role, all hospitals should be taken into public ownership.

On 5th July 1948 the NHS was born, much to the chagrin of many in the government, as Bevan was adamant that, where medical need existed, medical care should follow and budgets should be of secondary importance. This may seem like a rather utopian view of what is in many respects a huge commercial operation, but many in business today share Bevan’s take on how to run such a complex business. Increasingly, a budget is recognised as a safeguard, a guide and an analysis of business activities, but should it inform the confines of day-to-day needs and activities? Many think not.

It might benefit those who currently claim to control the NHS to consider the Bevan view – after all, the root of the NHS is the human person, whose needs must always come first. Which brings us back to those clogged up A&E departments. Ask any GP and they’ll tell you that, whether it’s an aspirin or a decision to send a patient down the line to A&E, there are few decisions today that genuinely and cleanly rest in their hands. Far worse, more and more are telling us that they no longer feel like doctors at all, but cogs in a much larger, industrialised process that sees us, the public, not as a cherished asset but as an unwelcome drain on central resources.

So, yes, we do roll up to A&E for a sticking plaster or a hangover cure, but that’s because today it’s where your system sends us.

Take a case in point – last weekend our elderly neighbour cut her finger badly opening a food tin. It wasn’t fatal but despite several home dressings, it wouldn’t stop bleeding. Forget our bright, new community health centre, that’s strictly Monday-Friday 9-5, and there’s no local pharmacy open. Neither could we raise the local cottage hospital. The NHS helpline took us back to bandages and, when we said that wasn’t stopping the bleeding, they clearly opted for the safe bet and sent us straight to A&E.

Yes, we waited far more than four hours, but there were lots of others like us there – gardeners with chopped fingers, footballers with split knees, and even a paintball kid who’d run into a tree. None of the injuries were major, or even worrying, but they couldn’t be left, and this was the only place in town. Annoying for the one completely frazzled doctor on duty, who as it turns out would be on major surgery uty all the following week, but also a pain for all those nursing and clerical staff who had to be there on a weeked to process and despatch all these wandering strangers.

I’m the last person on the planet to want to unpick Aneurin Bevan’s dream for an NHS but, if budgets really are secondary to health provision, then maybe our government does need to look at something as radical as decentralising the NHS, and handing it back to local, and perhaps even community, control. Sadly, it seems that the former is nigh, but the latter is unlikely in the extreme.

One thought on “Should we hand NHS back to local control?, by Joseph Kelly”