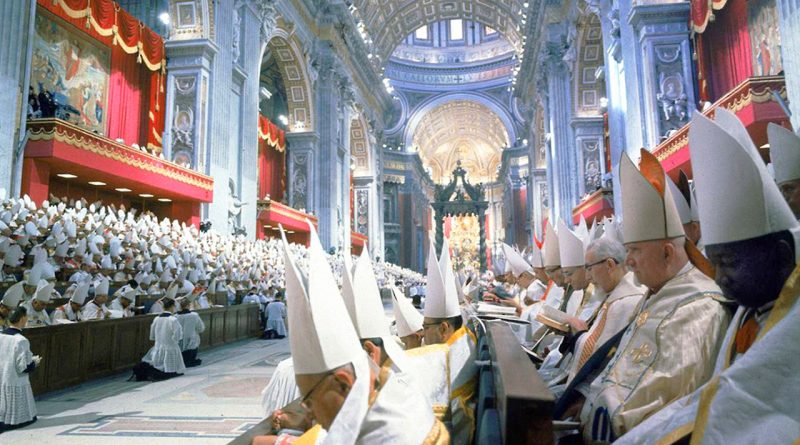 With all the drama and controversy that has beset our government and legislators over recent weeks, one thing has become particularly clear – the ability to listen is a quality that is critical to the common good. In generations past it was less important, as most things about life and the human condition could be presumed fairly safely – everyone and everything had its place, and society could be expected to react in ways that were entirely predictable. This was also the case in the Catholic Church, its rigid hierarchical structure and fixed outlook ensuring that the Catholic response to any given situation could be well anticipated. Whilst the Catholic Church has been grounded securely for two millennia, the past 50 years has seen everything questioned, and nothing gone unchallenged.

This year marks 60 years since the opening of the Second Vatican Council, called by Pope John XXIII because he believed that the Church needed ‘updating’ (in Italian: aggiornamento) in the light of the increasing secularisation and sweeping social and moral changes of the 20th century. Many resented even the notion of such an event and when John XXIII died just after the first of its five planned sessions, it is often said that his successor Paul VI promptly slammed the door on the world shut again, bringing the Council to a rapid conclusion at the end of session four. What actually happened is still a matter of much heated debate and there seems little consensus within the Church as to whether the whole venture was a success or a failure. The truth is probably somewhere in between, that the Council went too far for some but failed to live up to the expectations of others.

What did change was dramatic – the Jewish people were absolved of collective guilt for the death of Jesus Christ, Protestants became ‘separated brethren’, and we began to talk of ‘fellowship’ with non-Christians. In the years that followed the Council Catholic identity blurred distinctly – the Mass went vernacular, mantillas disappeared, interfaith marriages became less taboo, Catholics no longer blessed themselves when passing churches, the Angelus evaporated and the Church became increasingly controlled by committees and clerical administrators.

In considering why Pope Francis has now called for a two year synodal process hoping to address many of these concerns, it’s worth pointing out that Francis is the first pontiff to have received Holy Orders after Vatican II – thus he carries little baggage from the pre-conciliar Church, and he takes the intentions of Vatican II as read. As Cardinal Timothy Dolan of New York put it recently: “We have a pope who says, ‘Look, we just had five decades of internal debates and controversy about the meaning of Vatican II, and now it’s time to do it.’ And that’s what he’s doing.”

Whether you approve or you’re outraged, few would argue that Pope Francis has created a radical shift in emphasis for the Church, moving away from moral judgementalism in favour of social justice, a more open interaction with the secular world and a more collegial Church. He started the discussion process early on in his papacy, sending bishops’ conferences around the world a questionnaire in late 2014 seeking out the views and attitudes of ordinary Catholics on such hot topics as homosexuality, contraception and the eligibility of divorced and civilly remarried Catholics to receive Communion. The process was fraught with controversy, some objecting to the language of the questionnaire, others arguing that the Church should not define its teachings through opinion surveys.

At the time I was heavily involved in helping the Church to publicise the questionnaire, and encouraging Catholics to fill it out. I was also involved in the preparation of the local discussion meetings – parishes were invited to nominate a couple of ‘suitable’ delegates who would submit a question ahead of the diocesan meeting which, if agreed, would be read out and discussed. Inevitably the process led to a room full of committed and observant Catholics largely content with the status quo debating a range of relatively timid questions. The results and recommendations were then compiled and discussed in Rome, where presumably they were of some use in guiding the direction of the Church. We’re told that at the first session Pope Francis told the 200 or so members to speak “without fear” and to say “what one feels duty-bound in the Lord to say”. The loudest noises apparently came from those who objected to the whole process and its content, with accusations of heresy, racism and the threat of schism.

Six years on our Church is once again convoked in Synod, heading towards the XVI Ordinary General Assembly of the Synod of Bishops in October 2023 on a path entitled For a Synodal Church: Communion, Participation, and Mission. The processes involved are similar to the 2015 exercise, with the Church engaging in a listening process at all levels through the use of meetings, written submissions and collective events. The Preparatory Document for the Synod makes it clear that this time the intention is not to create documents but to “to plant dreams, draw forth prophecies and visions, allow hope to flourish, inspire trust, bind up wounds, weave together relationships, awaken a dawn of hope, learn from one another and create a bright resourcefulness that will enlighten minds, warm hearts, give strength to our hands.”

Central to this aspiration is the concept of co-responsibility, which seeks to endorse that the voice of the laity must be heeded if we are to advance the mission of the Church. The Pope has made it clear that this dialogue cannot be achieved without transparency and accountability on the part of the Church, and a shift away from clericism towards a more open and welcome approach to the world. As part of the synod journey there is a particular call to reach out to those who presently feel excluded from the faith, or feel it has no relevance to them. This will present a particular challenge to us all, as it is essentially an echo of Jesus’ call for us to “go and make disciples of all nations.” (Matt 28:19)

Reaching out to the divorced, to non Mass-goers, to the lapsed and non-believers, as well as the homeless, the poor, marginalised and dispossessed will not be easy, but it is our experiences in trying to do this that the Synod is calling for. Given some of the darker aspects of our recent history, and the uncertainty in the world at large, there is an urgent need for The Catholic Church to show corporate repentance through such good works and to confirm that it still has a vital role to play in the complex fabric of modern society.

With everything that has happened in the world and to us all over the past two years we are now confronting the challenges of rebuilding society, the planet and a secure future for the next generations. We know from bitter past experiences that those in positions of worldly power will prioritise the economy and reducing debts, leaving those of faith to carry the cross of the marginalised and the vulnerable. This latest synodal journey is a unique opportunity for us all to say whereabouts on that street our Church should stand, and how we will be judged in the years ahead.

So I would encourage you to participate in this synodal journey in whatever way you can to help inform what manner of Catholic Church we will hand down to our children.

Bishops’ Conference information and resources on the Synod: https://www.cbcew.org.uk/synodal-church/

Joseph Kelly is the founder of www.thecatholicnetwork.co.uk

4 thoughts on “A Synodal Church will not only need to listen more, but will have to respond to some hard realities, says Joseph Kelly”